Performance at OUG Jade restaurant. The school had their 3 day transportation and costumes sponsored which allowed ZRCLC to donate 100% of their collections

ZRCLC has for the past 4 years undertaken similar annual fund-raising activities for other charities. Their ethos being that refugee children are no less able to give help and assistance to others in need despite their displaced status in society.

“Over the past 11 years, we have been blessed with the generosity of Malaysians in running our learning centre. Apart from helping us pay for the rent and utilities, Malaysians have also supported us by donating food, books, stationery and from time to time teaching our children in the classroom. Hence we teach our children about the importance of returning the goodwill and our annual caroling is one way of imparting this value to them” says Cecilia Mi Mi Win, head teacher of ZRCLC. 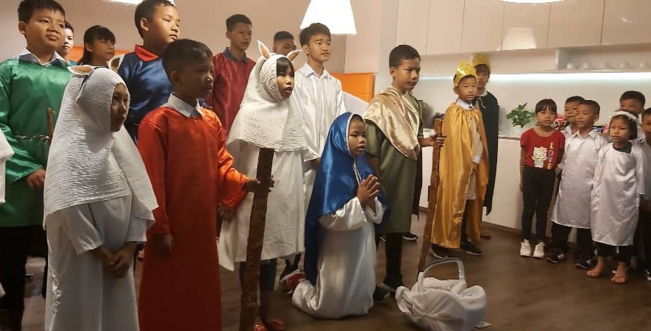 The musical comprised of acting the Christmas scene and singing of corresponding traditional Christmas songs. Their finale song “We Are The World” brought everyone singing together in chorus “It’s true we’ll make a better day, just you and me” Many who watched their performance were deeply moved.

“We were blown away by the children’s performance! It was impressive to see how, even the 6 year olds  were able to memorized the lyrics of every song that they sang ” shared Rayfeal Lopez who invited the children to his office as part of the company's Christmas celebration.

ZRCLC was established in 2008 under the protection of the United Nations High Commissioner for Refugees (UNHCR). It relies primarily on the generosity of individuals for its operations.

Anne Rajasaikaran, Chief Executive Officer of The Budimas Charitable Foundation was deeply touched by the generosity of the children of ZRCLC who chose Budimas as this year’s beneficiary.

“To be able to have such compassion at such a young age clearly shows how grounded these children are, it amazes me that in the midst of their own struggle they still find the joy in giving back.  This act is commendable” she said.

The children were excited to know how much they raised after every performance and were overjoyed when the final amount was announced to them.

Luke Kap Za Lian, a 12 year old ZRCLC student who played the role of one of the Wise Men exclaimed “It is such a morale booster to see so many people recognizing and supporting our efforts through their generous donations!”

Through their talents and sincere efforts, these children contributed in making Christmas more meaningful for many, reminding us that charity is not exclusive to those with financial means.

KUALA LUMPUR. Children from a local refugee centre raised over RM25,000 for the children of the Orang Asli community as part of their annual efforts in giving back to the underprivileged young of Malaysia.  The 30 children from the Zotung Refugee Catholic Learning Center (ZRCLC) moved audiences to support the cause as they performed in a 20-minute Christmas musical for companies and private homes.

The support came in many ways during the 3-day caroling event. Some companies invited the children for their annual Christmas party, some hired them as part of their Christmas CSR program, while others simply opened up their offices and homes to reach out to more.

One of these included YB Teresa Kok’s Christmas party held at OUG Jade Restaurant. YB Teresa Kok gave a boost to the children’s fund-raising efforts by contributing a generous personal cheque immediately after their performance. This sparked more pledges during the night.

YB Teresa Kok also delivered an impassioned speech calling for continued community engagement, recalling her personal experience of witnessing how a Vietnamese refugee turned doctor was utterly grateful to Malaysia for her success in life.

A performance of acting and singing at CEO Suites - Q Sentral 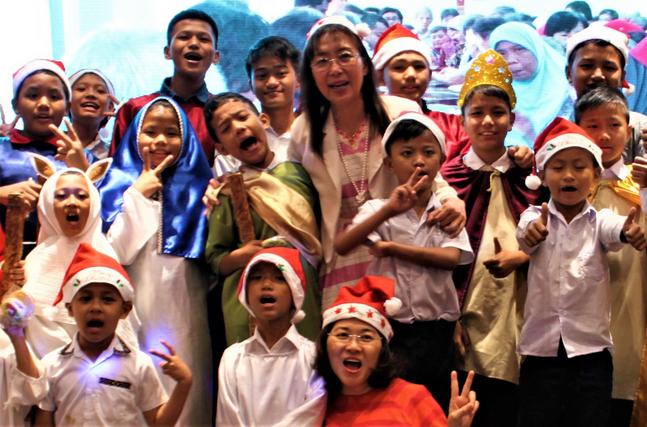